Previous Next
Building Your Own Outdoor Hockey Rink | Canmore

There’s literally nothing more Canadian than a skate or a game of shinny on the “ODR” (outdoor rink for those of you who may not be as familiar with the regional hockey vernacular).  As the temperature dips, and stays low, now is the time to start thinking about setting up the ice.  Whether its on the acreage, in the backyard, or in a community space, laying the ice can be easier than you think.

What you’ll need to build an outdoor hockey rink… 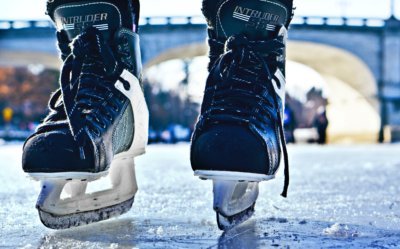 You’ll want to make sure the area is fairly level, since if you have say a 3″ slope across the area you’ll need 8″ of ice on one side and 5″ on the other.

To reduce damage to the lawn below, I would remove the rink as soon as the snow starts to melt.

There are two ways to set the base for your ODR, one is using a plastic or tarp beneath the ice, and the other is simply using packed snow as the base.  Packed snow won’t hold water indefinitely like plastic, but it will hold it long enough to freeze, and when the rink melts, it melts, and the lawn never shows any signs of stress.

First of all, wait until you have good snow cover and you’re confident it isn’t going to melt away on a warm day. For us in Canada, Boxing Day (Dec 26th for those in the States) is the traditional rink-starting day. If the snow is “packing snow” we can stomp as is; if not we put a spray attachment on the hose and spray water on it as we go. Working in squares about 8 feet on a side, and wearing thick heavy boots (visitors in delightful city boots with narrow pointy heels don’t get to help). We just stomp down the damp snow into almost-ice, walking over the same sections again and again to eliminate the holes and ridges from the time before.

Now, it’s best to position your rink where there is convenient access to water for flooding it. Consider the length of your garden hoses and where you can access a water spigot when planning your rink. Few yards are completely flat, but try to find a location where the slope is no more than a few inches from one side to the other. Manufacturers of skating rink kits generally advise no more than a 6-inch slope, since the greater the slope, the higher the perimeter walls will need to be in order to hold the water.

Build a raised border around the rink area, at least three inches high (it may need to be even higher if your yard has a slope). A lumber edging made for 2×4 lumber set on the edge can work, or large-diameter PVC piping can also work. Or, for a true bargain option, just heap up snow in a three- to five-inch mound around the perimeter of the rink. To hold the average adult, the ice on your rink needs to be at least 3 inches thick to avoid cracking.

Next, spray the snow base lightly with water several times, and allow it to freeze. The first spraying should be very light, so as to avoid melting the layer of snow you laid for the base. This layer of water-saturated snow will form a barrier that prevents the water from soaking through to the ground when you flood the rink. A sheet of plastic or tarp can also be used as a liner to prevent water from soaking through to the grass. 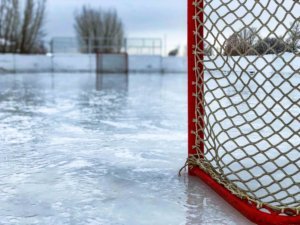 Once the base and sides are ready, the rink can be flooded. For a solid freeze, the temperature should be about 20 degrees Fahrenheit or colder for at least three consecutive days. The best results are achieved if you take your time and spray thin layers over the entire rink, rather than allowing it to gather in a large pool.

Hard use by skaters will chip the ice and may even crack it. To fill in holes and cracks, use a water-snow slush mix as a filler and allow it to freeze, then re-flood the rink. When snow falls, a simple shoveling with a plastic or vinyl push-style snow shovel is often all that is required. Periodically, re-flood the rink with additional water.

Winterkill is most likely to occur in the spring when freezing and thawing occur, and when water pools on the grass for long periods of time. When the rink starts melting, take measures to speed up melting and draining of the water. Snow banks and boards around the edges of the rink should be removed so the water can run off easily.

Curious about what we can do in your outdoor living space throughout the winter? Read about our Winter Landscaping Services here.